Imma try it again. The sentence that made the audience poop their pants and obey the master called Buddy Guy during a live performance (captured on the video below). A prime public speaking example of how to command the attention of a very immature audience and reestablish your presence.

So, in other words, this video is about presenting and pitching.

What the following video will show you is what to do when your audience starts to behave like a bunch of drunken, out of control kids. The interval of the first three minutes is where you will see the master at work trying to discipline the audience.

A Word On The Audience

It’s obvious that not all deserve the punishment Buddy wreaks upon them as some of the audience members are actually there to LISTEN to the master. But, you are as strong as your weakest link – and having even a small bit of the audience not behaving as they should, means that measures need to be taken to reinforce your presence.

I extracted 5 key moments from the video, explained them in shallow detail and provide a key lesson to be learned. First, watch the beginning of the video up until the 3rd minute.

50 seconds down the video. A simpleton yells: You are better than this! referring to Buddy’s performance. My reaction:

You can feel the temperature drop by a couple of thousand degrees in the venue.

First of all, you are a member of an audience that is listening to a public speaking gig. An audience is supposed to listen to the performer. If the performer is bad, you have some right to address him and let him know that his performance is bad.

You have that right IF and only IF

Second, you are addressing Buddy Guy. People would kill to see him perform, and the only thing you can say to him is “you are better than this”?

But Buddy is a pro. And he is patient.

He just lets that comment ricochet of his velvet shirt and waits for the right moment to destroy the simpleton.

Anybody can become angry – that is easy, but to be angry with the right person and to the right degree and at the right time and for the right purpose, and in the right way – that is not within everybody’s power and is not easy. – Aristotle

Be patient and do not let them get to you until the right moment.

1:30 – He tests the audience to see how much they are actually respecting his performance by letting them finish off a verse of his masterpiece. He knew beforehand that they would fail the test – he did it regardless just to have a valid reason to discipline them afterward.

This EPIC FAIL from the audience meant that this was the right time and right moment for Buddy to begin his disciplinary action.

Let them know why you are here in the first place.

I was doing this same damn song about three weeks ago in Tokio. They knew what I was talking about and I know you know.

I did not come here…excuse me…KIDS, for you to fuck this song up like that.

Let the audience know they fucked up.

He pauses, coughs on the side and leaves his head tilted slightly so that he announces his last piece.

Set an ultimatum and make it clear. This is your show. They came to see you perform. You are in charge of the venue, the audience, and the performance. YOU ARE THE MASTER.  If they prevent you from performing, you need to give them a proper spanking and let them know that FAILURES like that one will not be tolerated.

Then the test came to see if the audience has learned their lesson.

2:38 Judging by the smile on his face after he tested them, the audience passed the test and were allowed to be in the presence of the master for 7 more minutes.

After he rewarded them with a smile, Buddy continues on to do what he does best. 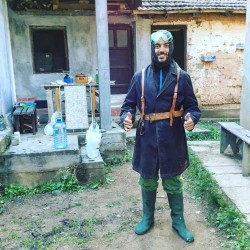